In its main findings, the study indicates that by the middle of this century (2041–60): 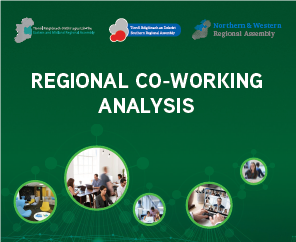 More than 1 in 4 private sector workers are capable of operating remotely, analysis from the 3 Regional Assemblies of Ireland showsRemote working has the potential to open up an array of…

We may not be able to travel but that doesn’t stop us getting together to showcase some of the good work happening across the region.  The Southern Regional Assembly, as partners on the…