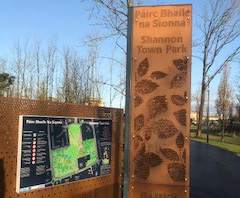 Shannon Town Park, an exciting €1.5m project, was launched on Tuesday 19th November. The Park is part-funded under the European Regional Development Fund’s Southern & Eastern Regional Programme 2014-20, which is managed by the Southern Regional Assembly, and Clare County Council.

The Park will contribute to the recreational amenities of Shannon Town and the revitalisation and regeneration of the urban environment in the designated urban centre of Shannon as part of an integrated urban design strategy.

The Park caters for all sectors of the community and includes formal footpaths and cycle track, an adventure play area, a cycle pump track, formal and informal seating areas, picnic areas, lighting and signage, the creation of a natural water feature and new native woodland planting, and all ancillary works and services.

David Kelly, Director of the Southern Regional Assembly said, “We are delighted to see the successful delivery of Shannon Town Park through this partnership between Clare County Council and the Southern Regional Assembly with European Regional Development Fund assistance through the S&E Regional Programme 14-20.  Projects such as Shannon Town Park are a clear example of how important European funding is to Ireland and how it can directly benefit regions and local communities.”

Cathaoirleach of Clare Co. Co., Cathal Crowe stated “The development of the Shannon Town Park has provided an enormously valuable amenity for the entire community and now that it has been delivered and is open to the public, it is important that the community themselves feel a sense of ownership and responsibility for playing a key role in ensuring Shannon Town Park remains an attractive amenity which everyone can enjoy for many years to come”.

Liam Conneally, Director of Economic Development and Shannon Municipal District Co-ordinator said, “The development of the new Shannon Town Park demonstrates the importance of Council’s European funding opportunities which aim to deliver key facilities for urban-based communities like Shannon. The new town park adds to the amenities of the Town and contributes to Shannon’s revitalisation and regeneration. Clare County Council together with the Southern Regional Assembly have, through the European Regional Development Fund, supported the development of the new Shannon Town Park - a key element of the award-winning Shannon Town Green Infrastructure Plan”.

The first newsletter for the COHES3ION project is out, please click here to read. The Southern Regional Assembly is the Irish Partner on COHES3ION, an interregional project which aims at…

The Interreg North-West Europe Monitoring Committee met on 12th February 2020 in Brussels to decide on applications made to the Programme under the first Call for Capitalisation.  At the…