The Minister for Transport and the Minister for the Environment, Climate and Communications, Eamon Ryan TD officially launched the Dodder Valley Bridges today, Friday 8th October.

The bridges are a key phase of the larger Dodder Greenway project, which will link Sir Rogerson’s Quay in Dublin City Centre to the entrance of the Bohernabreena Reservoirs at Glenasmole, South Dublin, utilising existing facilities with the Dodder Valley as much as possible to connect the linear parklands along the route. The Dodder Greenway is being developed as a Greenway of International renown.

The Dodder Greenway represents a major new transport and recreational facility for Dublin, catering for both commuter and social cyclists.  The route takes specific account of the rich ecology of the area and is a combination of off-road and on-road cycleways utilising existing facilities within the Dodder Valley as much as possible and connecting the linear parkland along the route.

The Dodder Greenway is a major part of South Dublin County Council’s Cycle South Dublin strategy. Approved by the Council’s elected members in April 2021, Cycle South Dublin seeks to progress works on 260km of new and improved cycle lanes across the County. It reflects the increasing importance of making cycling a realistic and integral part of how people move around and includes 63 projects.

Speaking at the launch, Minister for Transport Eamon Ryan TD said: “We celebrate the opening of the Dodder Bridges because they are vital pieces of a planned network of safe infrastructure. The Cycle South Dublin strategy is one of the most ambitious programmes for cycling in the country and will deliver a 260km network of cycle lanes connecting homes with the places people need to go on a daily basis. By improving and expanding these facilities, we can ensure our cities, towns and villages are more connected and accessible while making sustainable travel a real alternative to private car use. That’s why we are investing €360 million per annum over the ten years to 2030, with a view to providing active and safe ways of travelling right across the country.”

Anne Graham, Chief Executive Officer, National Transport Authority, said, “NTA is delighted to have co-funded this phase of work on the Dodder Greenway. We worked closely with South Dublin County Council to deliver this scheme, which will make walking and cycling safer and more attractive for more people in this part of Dublin and beyond. The Dodder Greenway is precisely the kind of projects that we need to focus on as part of the effort to tackle climate change and provide an alternative to the private car.”

Dave Hennessy Assistant Director, Southern Regional Assembly said, “Congratulations to South Dublin County Council on the successful delivery of the Dodder Valley Bridges and how they used EU funding from the ERDF S&E Regional Programme. Projects such as this are a great example of how our EU membership directly benefits our regions and local communities.”

The Southern Regional Assembly manages the ERDF Southern & Eastern Regional Programme, and the Dodder Bridges project is one of its Sustainable Urban Development projects. 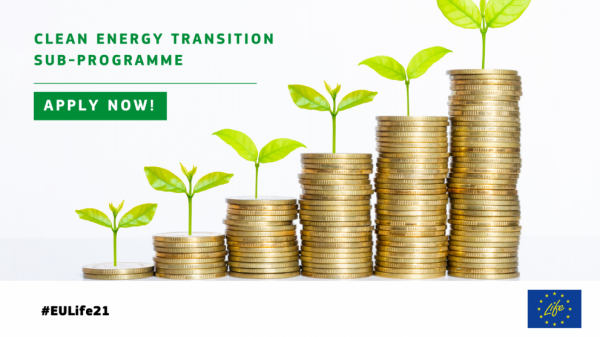 EUR 95 million available for funding your project ideas to accelerate the Clean Energy Transition in Europe!

The LIFE Clean Energy Transition Call for Proposals 2021 includes 18 topics open for submitting your proposals. Funding is available for your project ideas to: build the policy framework…