“What’s the Story? – 25 Stories about Ireland and Europe”

“What’s the Story? – 25 Stories about Ireland and Europe”, is a publication featuring 25 stories that highlight how Ireland has benefitted from EU support or funding and draws on examples from communities, businesses, farms, schools and universities was launched in Dublin on Tuesday 1st October.  Staff from the Southern Regional Assembly, based in Waterford attended the launch

Three of the celebrated stories featured were supported by the Southern Regional Assembly through various European Territorial Cooperation Programmes, better known as Interreg, whose objective is to promote harmonious economic, social and territorial development of the Union as a whole.

Dunhill Ecopark, located along the UNESCO Copper Coast Geopark in Waterford, has been highlighted as one of Europe’s most inspiring rural businesses and is well known for pioneering a diverse range of projects and initiatives.  The ACTION project pioneered a ‘social franchise’ concept with community and social enterprises and HERCULES developed sustainable cultural tourism products built on 'Sense of Place’.  Both projects were funded by the Ireland Wales Programme 2007-2013.

The eMen project is working to improve mental health through technology, focussing on young people affected by mental or neurological disorders including depression and anxiety.  The aim is to promote affordable, accessible, effective and empowering mental health supports through an e-mental health platform available across the North-West Europe region and is led by Mental Health Reform in Ireland.  This project is funded by Interreg North-West Europe.

The More Than a Club project was led by the FAI in Ireland, which worked with local professional football clubs to pilot social programmes that address social needs within their disadvantaged communities and to develop social enterprises to deliver them, was funded by the Ireland Wales Programme 2014-2020.

At the launch, Gerry Kiely, Head of the European Commission Representation in Ireland, who prepared the publication, said: “One of the greatest stories to be told today is that of Ireland’s relationship with Europe. It’s a tale that has lasted over four decades, and one that will continue to unfold for many future generations. The real story of the European Union and Ireland however can be found in the stories that unfold quietly and without fuss in the communities, businesses, farms, schools and universities around the country.”

European Affairs Minister Helen McEntee, TD, said “Since Ireland joined the EU in 1973 we have benefitted hugely from our membership. In that time, we have moved from an isolated island on the fringes of Europe, to a modern island at the heart of EU.  The EU is our home and it is one that we have helped to build and will continue to nourish and improve over the next number of decades.

“Today’s stories give practical examples of how we in Ireland continue to benefit from our membership of the EU.  The EU spans across the entire continent of Europe and allows us to have endless opportunities, to work, live, study and travel in each-others countries.  This is something that we must protect, so that this generation and the ones who follow can continue to benefit from.”

An interactive version of the “What’s the story” booklet can be downloaded on the website https://ec.europa.eu/ireland/services/publications/25-stories-about-ireland-and-europe_en

Hard copies of the publication can be requested from the European Commission Representation in Ireland, Europe House, 12-14 Lower Mount Street, Dublin 2, e-mail: eu-ie-info-request@ec.europa.eu

In the associated event photograph from left to right:

MATCH-UP Partners Travel Back in Time 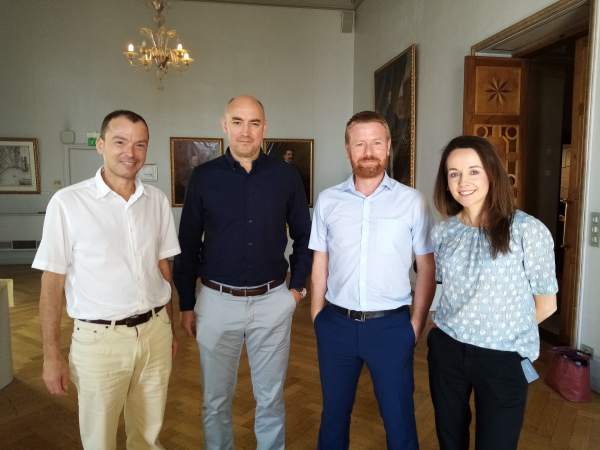