A Socio-Economic Index was developed to:

For the purposes of the GHDI study, two 'Zone' boundaries were determined to establish the extent of the functional area associated with the urban core. Zone 1 reflects the urban cores i.e. the relevant cities catchment or funcational area , where in excess of 20% of the residents in employment commutes to the urban core (Zone 1) to work. 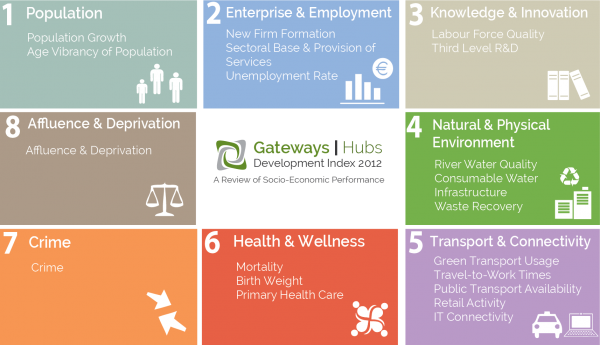 The Zone 2 areas may extend beyond the administrative boundaries of each Gateway settlement (See Limerick-Shannon Gateway map which illustrates Zones 1 and 2). In many cases, this has resulted in large parts of the surroundings rural hinterland also being included within the study area, which reflects the influence and economic reach of the Gateways. Accordingly,

The analysis of the Gateway/Hub is undertaken using a series of eight domains and constituent indicators, respecting where possible, those originally adopted in the Gateway Development Index (GDI) 2009. The GHDI 2012 does reflect some minor changes in the suite of indicators used to the 2009 Index. While a small number of data sources were no longer collected, additional indicators have been identified at relevant spatial levels which serve to further improve the evolution of the index.