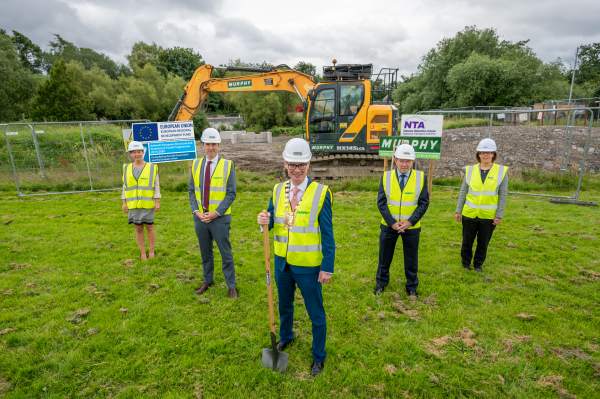 Work has begun on the €4m Dodder Greenway project that will link Dublin City Centre through Ballsbridge, Milltown, Rathfarnham, Firhouse and Tallaght to the Bohernabreena reservoirs in the Dublin Mountains.

Costing approx. €4m and funded by South Dublin County Council in partnership with the National Transport Authority and the European Regional Development Fund’s S&E Regional Programme, the project will build three new pedestrian and cycle bridges, 750m of new path and 2.6km of upgraded paths along the Dodder Greenway.

The Dodder Greenway will connect communities in Dublin and represent a major new transport and recreational facility for the entire region, catering for both commuter and social cyclists.  The route takes specific account of the rich ecology of the area and is a combination of off-road and on-road cycleways that will utilise existing facilities within the Dodder Valley and connect with the linear parkland along the route.

Derville Brennan from the Southern Regional Assembly, managers of the S&E Regional Programme said, “We are delighted to see the start of the Dodder Valley Greenway project through this partnership between South Dublin County Council and the Southern Regional Assembly, co-financed under the S&E Regional Programme 14-20.  Projects such as this are a clear example of how important European funding is to Ireland and how it can directly benefit sustainable regions and local communities”.

As part of this phase, 3 bridges will be constructed in the following locations:

Following the landscaping and the construction of tie-in footpaths, it is planned to have the bridge phase of works substantially completed by the end of 2020.

The EU and the Southern Regional Assembly are celebrating how the EU delivers for the regions for the month of September.The “Europe In My Region” initiative is a collaboration between the…

This year, the European Week of Regions and Cities will spread over three consecutive weeks in October, each dedicated to one theme:5-9 October: Empowering Citizens 12-16 October:…